The Mauritius Police Force (MPF) is the national law enforcement agency for the Republic of Mauritius.  It is governed by the Police Act 1974 and responsible for policing on mainland Mauritius, Rodrigues and other outer islands.

It is headed by the Commissioner of Police and operates under the aegis of the Home Affairs Division of the Prime Minister’s Office. The MPF is presently composed of about 12, 500 Police officers posted Divisions and Branches which comprise, among others, an Anti Drug and Smuggling Unit (ADSU), Passport and Immigration Office (PIO), paramilitary units- Special Mobile Force (SMF) and Special Support Unit (SSU,) an air wing -Police Helicopter Squadron (PHS) and Maritime Air Squadron (MAS) and a naval wing-National Coast Guard (NCG).
The Commissioner of Police is supported by Deputy Commissioners, Assistant Commissioners and Police Officers in various grades and is empowered to set rules and regulations, through standing orders, for an effective and sound management and functioning of the MPF and for a better delivery of service. 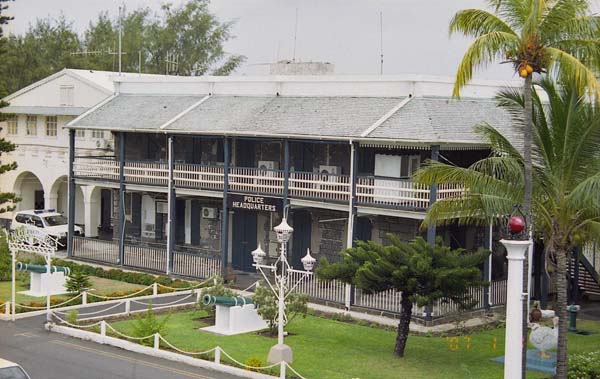 The story of the Mauritius Police Force may be traced as far back as 1767 during the French colonial period, when Antoine Codere was appointed “Commissaire de Police”. He had then as assistants Inspector Desranges de Richeteaux and Inspector Ignace Brunel. Guillaume Desranges de Richeteaux
At that time, the ‘Commissiaire’ was also the “Juge du Conseil Superieur”, the equivalent of a Supreme Court Judge today.
Whilst the Commissioner had the control of Port Louis, the country districts were policed by local military commanders.Later, on the 31st of July 1794, a CID organisation was formed for Port Louis or “Port North West”.
On the 28th of October 1803, Decaen, then Governor established a Police Headquarters and placed it under the charge of an “agent-général de Police”, who also was a Justice of the Peace and president of the tribunal, Police Correctionelle, later replaced by “Tribunal de Premiere Instance”.
The Police Headquarters was located at Place d’Armes on the right hand-side of the present Government House when facing the sea. In 1810 it was transferred to Pope Henessy Street, on the premises adjoining the Municipality of Port Louis. However on the 22nd of March 1922, it was finally accommodated in Line Barracks where it still exists today.
The constructions of the first buildings in Line Barracks started in 1740 at the time of Mahé de Labourdonnais and were completed in 1774, a date which can still be seen engraved on the gate of the Police Headquarters along Deschartes Street. The Line Barracks compound stretches over an extent of 26 acres.

After the British occupation in 1810, a British Officer, Mr. A.W.Blane, took command of the Force.
In 1816 a Corps of Gendarmerie was formed following the French pattern and for linguistic reasons the command of the Force was, at the same time, shared by a British and a French Officer between 1816 and 1818.
The organisation as it exists today is more or less the result of the Commission of Enquiry of 1859.
The ordinance which governs the Police was enacted in 1893 and has now been replaced by Police Act 1974.
The Chief of the Police Force was called Inspector General of Police until 1934 when that title was changed to Commissioner of Police. The Mauritius Police Force today is entirely responsible to the civil authorities.