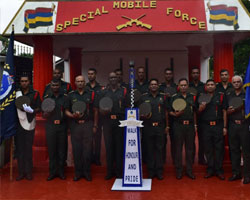 The story of the Mauritius Police Force may be traced as far back as 1767 during the French colonial period, when Antoine Codere was appointed “Commissaire de Police”. He had then as assistants Inspector Desranges de Richeteaux and Inspector Ignace Brunel. Guillaume Desranges de Richeteaux
At that time, the ‘Commissiaire’ was also the “Juge du Conseil Superieur”, the equivalent of a Supreme Court Judge today.
Whilst the Commissioner had the control of Port Louis, the country districts were policed by local military commanders.Later, on the 31st of July 1794, a CID organisation was formed for Port Louis or “Port North West”.
On the 28th of October 1803, Decaen, then Governor established a Police Headquarters and placed it under the charge of an “agent-général de Police”, who also was a Justice of the Peace and president of the tribunal, Police Correctionelle, later replaced by “Tribunal de Premiere Instance”.
The Police Headquarters was located at Place d’Armes on the right hand-side of the present Government House when facing the sea. In 1810 it was transferred to Pope Henessy Street, on the premises adjoining the Municipality of Port Louis. However on the 22nd of March 1922, it was finally accommodated in Line Barracks where it still exists today.
The constructions of the first buildings in Line Barracks started in 1740 at the time of Mahé de Labourdonnais and were completed in 1774, a date which can still be seen engraved on the gate of the Police Headquarters along Deschartes Street. The Line Barracks compound stretches over an extent of 26 acres.

Creation of the Special Mobile Force and Its Role

In 1960, the British Government decided to withdraw its garrison from Mauritius after 150 years of service in the island. On the departure of the British Garrison, the Mauritius Special Mobile Force was formed. It was evident that the task of the newly created SMF was to ensure the internal security of the country.

The Special Mobile Force was set up with the recruitment of a number of volunteers who had a certain experience of the Second World War and selected members of the Mauritius Police Force. The SMF took over the barracks formerly occupied by the King’s African Rifles at Vacoas and was named Abercromby Barracks, in the honour of General Sir John Abercromby, who led the forces which captured our island in 1810. The Special Mobile Force was commanded by British Commanders and it was not until 1978 that the first Mauritian, Col D. Bhima BEM MPM, assumed command of the SMF.

The SMF is a paramilitary force; it is an integral part of the Mauritius Police Force with its main function to ensure the internal and external security of the island. It is organised as a motorised Infantry Battalion with five Companies, an Engineer Squadron, and a Mobile Wing containing two Squadrons equipped with armoured vehicles.

Training at the SMF is based on conventional military tactics with emphasis on Internal Security Operations. All ranks are given a basic military training on their first joining the Special Mobile Force. Depending on their capabilities and aptitudes, some are trained on commando lines and a selected few are given specialised training for specific tasks.
The SMF is also employed for ceremonial guards of honour, search and rescue operations, bomb disposal, route clearance detecting and destroying gandia and illicit distillation, and helps opening of roads after cyclones.

Besides its paramilitary functions, the SMF is actively involved in a number of social activities.

The Badge and the Motto

Within the wreath of braided band (rows) of oak leaves significant of Royal refuge (re the Royal Oak Incident in May 1660) holding the Royal Crown, symbol of trinity within the three-pronged oak leaf stresses. Encrested within the wreath, letters “S” (Special), (Mobile) symbolising the lightning flash, and “F” (Force) making SMF. The central base of the wreath consisting of the oak leaves knot rests upon a scroll inscribed with the Regiment’s name “Special Mobile Force – Mauritius”.

The first Motto of the Special Mobile Force was
“The difficult we do immediately. The impossible takes a little longer.”

Which recently changed into

“WE’LL DO IT, WHAT IS IT “
Which was more apt after the various challenging tasks carried out

The Overriding interpretation can be summed up as follows:- 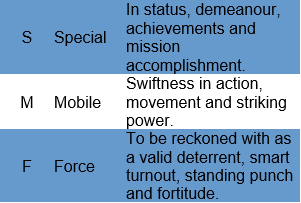